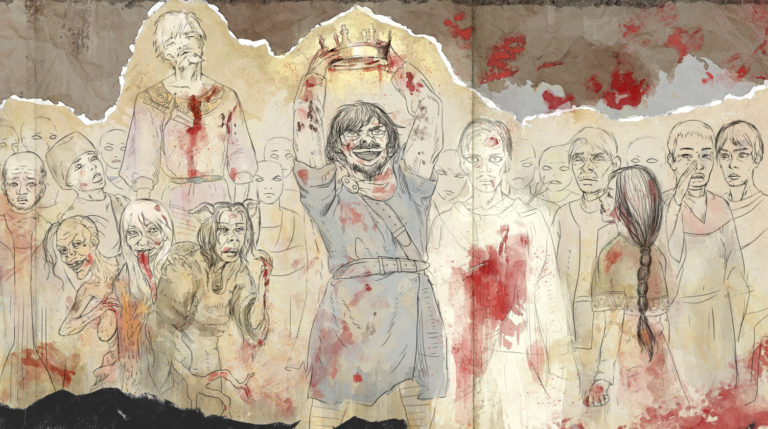 As playwright of the 17th century, you had one crucial advantage over a contemporary playwright: No distraction by Facebook messages.

Your disadvantage, on the other hand, was that if you got really unlucky, your whole family was extinguished by the black plague.

Well, can’t win them all.

But amidst all of the supposed madness of past centuries lived the man perceived as the greatest writer of all time: William Shakespeare.

For the tickle modern society nowadays finds in Facebook and Pinterest, it could 400 years ago find in Shakespeare’s plays – in fact, in Shakespeare’s times, dock workers were watching his comedies laughing so hard they were slapping their thighs.

And while Shakespeare was great in many regards and not so great in a few, today, let’s take one of the most famous plays ever written to show you how a masterful plot comes about: Let’s take a look at Shakespeare’s Macbeth.

How do you create suspense?

What is the single biggest thing that keeps the audience hooked?

There – I just asked some QUESTIONS you might want to know the answers to. You will realize the irony of this a bit further down…

Also, if you want to see my 9 crucial points you need to get right to have an amazing plot (might be different ones than you think), I have a free download for you. They are part of the “44 Key Questions” you should ask about any story: 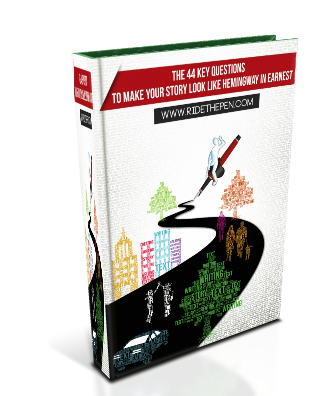 Macbeth tells the story of a nobleman (Macbeth), who receives a prophecy from three witches that he will become King of Scotland one day. This might have sparked his appetite for power, for he subsequently murders the king and rules the kingdom with malice. In the end his tyranny becomes so bad, an alliance of nobles has to get together to defeat him and behead him at his castle.

By the way, you can read the full text of Macbeth for free here.

Now let’s start out by explaining why an apple is an apple, i.e. answering the question: What is plot?

Plot is the movement of characters over the chess board of the story; it shows us what the figures do and what happens to them.

Good plot is plot that is moving the audience: It makes them feel suspense, laughter, anxiety or whatever else (Side note: If it’s a comedy and they only feel anxiety, you have done it wrong…). Plot is everything that happens, on a broader scale.

Additionally, plot will lead to POSSIBILITIES not acted out, which are very important as well, because they make the audience ask themselves QUESTIONS, e.g. the extraordinarily important question: What will happen next?

What MIGHT happen is often more thrilling than what actually DOES happen – you are aware of this if, for example, you have ever been out doing your thing while wondering whether you turned off the stove before leaving the house.

Excitement comes from what IS, and more importantly from what COULD BE. What actually is reality, is a little less exciting, because, well, it already is. It’s the unknown that excites us the most, it’s the possibilities:

How will your cat and your new pet canary get along?

What will Grandmother say when she finds out your new boyfriend works at Burger King?

Once you get the answers, things might become very exciting for a short time, but the joy or desperation will wear off quickly. A question left hovering, however, could tickle you forever…

What REALLY excites your audience is not the answer to the following question, but the question itself: “WHAT IS GOING TO HAPPEN NEXT!?“

So how do you make a plot really fascinating for the audience?

You do it by letting them wonder about as many QUESTIONS as possible. You see, this is the trick about creating a thrilling piece of plot: The game is about QUESTIONS!

Suspense is created by QUESTIONS the audience directs at themselves (because, well, there is absolutely nobody better around to direct them at…).

Solving these questions, in turn, leads to new questions, and it is also essential to ask those new questions before the old ones are resolved. This way you are making sure you have your audience hooked constantly and without any gaps in between, which would mean a lagging plot, or, in the common man’s words, a really boring story.

While the plot constantly develops in a dynamic way, new burning questions will arise.

Your questions should also come up in your story naturally. They should never feel as if they are just there because of the godlike will of the author. If a prisoner suddenly finds a file on the ground and there is no cake around it, your audience might feel manipulated and won’t buy into the illusion of your jailbreak story anymore.

You say so far this all sounds very theoretical?

Fair enough. Now let’s take a look at how master Shakespeare did it.

THE MASTER’S WAY TO DO IT:

(A.k.a.: Shakespeare didn’t have to post his food pics – Look how he hooked them instead…)

Speaking weird stuff in rhymes, running around under lightning in wide open space, probably with hunches, crooked fingers and dressed in rags. QUESTION: What the hell is this!??

Well, it is an unusual and very powerful way to start a play. Notice how an original setting immediately raises a LOT of questions, before even a single word is spoken (Who are they? What are they doing out there? What is going to happen next?), while also providing visually exciting elements on stage for entertainment-hungry, 17th century, Twitter-less eyeballs (storm, lightning, intriguing landscape, eerie women). Good stuff! 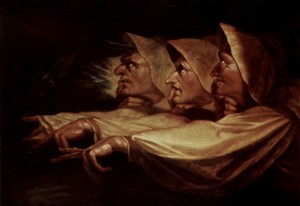 Cut to second scene. We hear war cries and see a king and a bloody warrior laying out a recap of the battle – it’s all very dynamic, but you don’t see the actual fight. So the play even spares the director the hassle of having to stage the battle, which in turn saves him a couple of stuntmen.

Immediately, questions arise: Who is fighting against whom? Who is winning? What do they want? Who was killed? What happened? What’s the king’s mission?

See how the plot starts to unfold almost unobtrusively, while questions, atmosphere and characters engage the audience’s interest and spark their excitement?

We hear about Macbeth before we even see him for the first time – this is, combined with the play’s title, a very effective way to spike curiosity. Questions: What will he look like? How will he behave?

We can’t go through every single scene here, or else you will have to witness me chew and digest my copy of Macbeth out of sheer madness, but you get the picture:

On a micro-level, asking questions works to engage the audience in a single scene, or maybe in an act.

On a macro-level, asking questions works to engage the audience in the whole drama and to overall wow them.

It is in the third scene of the first act that the witches predict Macbeth will become king. With their prediction perhaps the two most intriguing QUESTIONS of the whole drama come to mind:

Those two questions essentially amount to the same single one. They will be resolved in the beginning of the third act, when we see Macbeth appearing as king for the first time.

Notice how by then, there will have been some urgent NEW QUESTIONS established, to never let the audience off the hook for even one second (Will the nobles ever discover that Macbeth has murdered the king? How will Macbeth cope with his own guilt? Etc.).

PLEASE DON’T DO IT THIS WAY…:

They say you only really value something once it’s gone. So I want to make you value Shakespeare’s plot by cold-heartedly taking it away from you. This is how Shakespeare should never, ever have done it, no way.

Had he done it like this, they would have booed him off the stage, which would have made him so depressed he would have spent the rest of his lifetime on useless shit like twittering about his digestion all day long (Btw, twittering back then probably worked with REAL birds, as in messenger pigeons).

So there you have it, you better pay attention! As I’m doing this wrong, I will do it really wrong:

The king, Duncan, in his castle, doing his thing (Instagram or whatever). We see him interacting with his sons and with nobility. He is friendly with them. No problems given, no questions asked, no solutions needed. He has a nice convo with Macbeth about the weather. He has supper with the nobles. He farts and goes to sleep.

In a short, easy-going monologue, Macbeth tells the audience he has killed the king. He is wearing the crown and is now the new king. Lady Macbeth is happy.

We see Macduff coming towards Macbeth’s castle, some soldiers behind him. Suddenly a soldier appears on stage and announces he has killed Macbeth.

Granted, Shakespeare’s play has much more content, but nevertheless the main point presents itself in all its glory.

Notice all of the interesting questions missing: Will Macbeth murder the king? Will his guilt kill him? Will the predictions come true? How will Macduff react?

Much of the basic plot still happens: The king is murdered, Macbeth bullies the country, Macbeth gets killed. But there is no alluding to future events, no uncertainty around the acts or characters, no hovering possibility of doom. No witches. No questions. No fun.

THE EXERCISE TO FINE-TUNE YOUR WRITING:

Now it’s time for the first exercise ever on this blog. Take a look at the following story:

A kid with some talent for handicrafts buys a board, paints it red, and by attaching four wheels from an old office chair to the bottom, builds a skateboard out of it. He skates out of his village and over a country road into the woods. Under his arm he has his family puppy, so the little guy can go for a walk without the labor of actually having to walk… It’s a rough ride, and the skateboard gets caught in some roots and crashes hard. The puppy is hurt badly. The kid quickly wattles a makeshift basket out of some branches and carries his puppy back to the village vet.

Realize that this story has no hooks, no real excitement. But that’s where you enter the picture: You will make it look like a diamond in the rough. Inject some juice!

These are the rules: You can’t change anything or leave out any part of the plotline, but you should ADD a lot. Feel free to add anything you want, including characters, scenes, sub-plots, attitudes, needs, emotions, tensions… in one word: QUESTIONS!

Hint: Courtesy of yours truly, this story is especially drained of characters. Add a figure here and there, work out their relationships to each other, and it will work wonders.

You don’t need to write any dialogue or any complete scenes, just put down a rough outline of your story.

Oh, and don’t be afraid to put yourself out there, for you can truly only improve your fiction writing by actually writing. Be courageous!

You can find a lot more quality writing prompts I created for (almost) all genres here.

I hope that from now on you will think of great plot in terms of QUESTIONS rather than in terms of events.

Create an outstanding plotline by raising intriguing QUESTIONS. Raise new QUESTIONS before you answer the old ones – this way your audience won’t ever be let off the hook.

You will get them to eagerly turn the pages, completely addicted to your narrative. And you might, yes you just might… become even more important than Facebook to them.