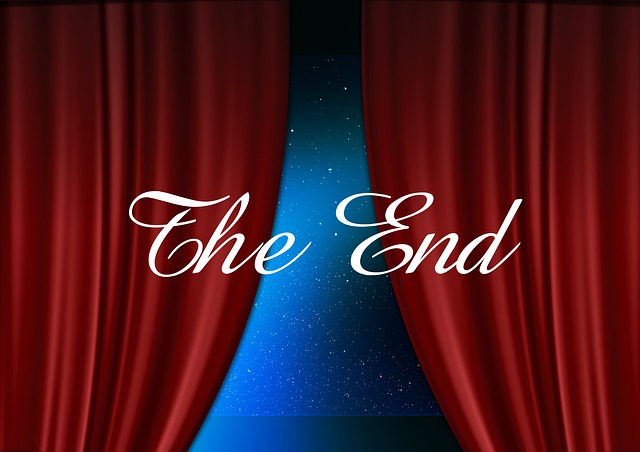 Have you ever finished a novel?

If yes, then you know that it feels like Christmas, Easter, and the tooth fairy combined.

Yes, there is something incredibly liberating and satisfying about putting the very last words under a story you have been poring over for months or even years. All of the bits and ideas are finally out and on the paper – it’s like the best form of exorcism ever.

You are free at last, and you have something to show for all of your hard work. If you are a boy, you feel like Ghengis Khan, and if you are a girl, like the Queen of England, I guess… (or like Angela Merkel? Let me know).

Ends don’t come easy, because… well… you have to write the entire piece first. I recently published a post about how to start a novel, which was very popular, and I expect this post here to catch a lot less attention.

Simple math. Lots of people start a novel, but only few writers have the endurance and tenacity to finish one. Google counts 1,900 monthly searches for “how to start a novel,” but only 720 for “how to end a story” (disregard the fact it says ‘novel’ in one and ‘story’ in the other; these are the highest google numbers for beginning/ending a story).

Most people give up on their big plans sooner or later, and that’s true for all areas in life. If you ever had the audacity to finish a novel, or if you will ever have it in the future, you can be very proud of yourself.

The end matters though.

It’s what your readers will take with them from your book. It’s your closing argument and the last thing they read. And it’s what they will remember when they think back to your story in a couple of years, if they remember anything at all.

So you better make your ending count.

Here is the good news: A story ending to remember isn’t even that hard to write. You will now see five typical endings that will leave your reader in delight. Authors use these five endings all the time, and that’s because they work really well.

If all else fails, just use one of these examples as a template for your own story.

‘How to End a Story’ PDF

I prepared a neat little PDF for you that summarizes this post. As a bonus, you can find two more famous story ending examples plus their descriptions. Let all of these endings inspire you. Instantly download for free:

Let’s take a look at how five reputable authors put their final exclamation marks on their finished pieces.

1. Take Them by Surprise

(Agatha Christie, And Then There Were None)

Surprise works every single time. That’s because us humans are just curious creatures. You could uncover a surprising fact or give the action a surprising twist. Anyways, your readers will appreciate being astonished; after all, that’s what they are reading stories for.

Your readers will have certain expectations. They depend on the genre, the protagonists, the language, and so on… Be aware of your readers’ expectations. Put yourself in their shoes. Then give them something they don’t expect, but still makes sense for your story.

Maybe the thief turns out to be the narrator’s own husband or even the narrator herself. Maybe the girl doesn’t pick between her two suitors, but instead marries their uncle. Or their plumber.

Agatha Christie, the master of plausible surprise, shows us perfectly how it’s done in And Then There Were None. Ten visitors are trapped on a small island and murdered one by one. As nobody else is on the island, it’s clear one of them must be the murderer… but who?

One suspect after another is snuffed out, until only one person is left alive. It’s now clear she must be the murderer, until… the highly unexpected closure reveals she is not. The novel ranks amongst the bestselling books of all time.

You will have to do without a quote on this one, because publishing the outcome of a murder mystery is just… bad taste; like sticking your finger into somebody else’s ice cream. You will have to find out for yourself.

2. Play on Their Sentiments with an Elegiac Fade Out

(The Unbearable Lightness of Being, Milan Kundera)

Milan Kundera takes a very different approach when he wraps up his The Unbearable Lightness of Being:

Up out of the lampshade, startled by the overhead light, flew a large nocturnal butterfly that began circling the room. The strains of the piano and violin rose up weakly from below.

Kundera’s classic novel fades into the distance like a piece of music. The ending doesn’t want to bring suspense, puzzle or get you to think. It’s all about mood. It’s a slow ending.

Try to make your reader really feel the power of the moment, be it terrifying, happy, sad, or sentimental.

Think of little symbols, like the butterfly above; with Kundera, it might stand for lightness, repeating the theme in the novel’s title. You could zoom in on a tapping finger or a dew drop, or zoom out to show wooded hills or a rural mansion. Landscapes and weather make very memorable finishing moments (“…and great shaggy flakes of snow began to fall.”).

Leave the reader with a unique vibe, and she will appreciate it. Sometimes, it’s all your closure needs.

3. Throw Them a Punchline

With this one, you have to be careful. Do you know that situation when Uncle Albert at the holiday lunch table makes a big fuss about his upcoming joke, but the punchline is almost non-existent? You don’t want to be like that. You could tell a joke or describe surprising action, but make it count.

Your punchline doesn’t have to be funny. It could be an action or a simple observation. In any case, it should connect to the story topic, even if it’s just a symbolic hint. Otherwise it will be up in the air and look arbitrary.

George Orwell’s novel Animal Farm is one big parable on how totalitarian systems arise and thrive. It’s told in an animal world. Look at the clever, indirect, but also poignant note Orwell ends on:

(Gone with the Wind, Margaret Mitchell)

If you want to tickle your reader with suspense, cue an open ending: Ok, the Apaches are defeated, but will they be back again? Got it, the starship has escaped the pudding-like aliens, but will it ever make its way home to planet earth?

These kind of endings will keep your readers on their toes and make them long for more. But be aware that they can also be very unsatisfying. After all, your reader bought your book so he can hear from you what happened. “Just imagine the rest yourself,” can be a little unsatisfactory. But if you have delivered a great deal of action beforehand and if the question is rather vague, it might be worth it.

Let’s showcase another one of the most successful novels of all time, Margaret Mitchell’s Gone with the Wind. It ends with Scarlett O’Hara longing to be together with Rhett Butler again – but can she? Also pay attention to the nice rhythm that keeps these phrases flowing:

I’ll think of it all tomorrow, at Tara. I can stand it then. Tomorrow, I’ll think of some way to get him back. After all, tomorrow is another day.

5. Repeat the Theme of the Opening Scene

Whatever your story is about, it probably circles around one specific topic: Be it the struggles of love, the rewards of honesty, or whatever else. It’s what keeps your readers breathless throughout the story. Now give them one last reminder of what they came for, one condensed moment of your topic, a big final exclamation mark!

You have many options to repeat your main theme in the closure. Think of people, actions, details.

Maybe your story is about the importance of friendship, and you wrap up with one friend putting a patch on the other friend’s abrasion.

Or you end on one friend smilingly watching the other friend’s bag while she is away.

Or a close up on the yin and yang badge on that very bag. It might be very simple, but it automatically gains meaning because it’s the last part.

The novel fittingly ends with a nihilistic paragraph as well. Large parts of the following text read arbitrary in content and form. In the end the very last words of the novel spell it out clearly: NOT AN EXIT.

[…]this is, uh, how life presents itself in a bar or in a club in New York, maybe anywhere, at the end of the century and how people, you know, me, behave, and this is what being Patrick means to me, I guess, so, well, yup, uh…” and this is followed by a sigh, then a slight shrug and another sigh, and above one of the doors covered by red velvet drapes in Harry’s is a sign and on the sign in letters that match the drapes’ color are the words THIS IS NOT AN EXIT.

You can end your stories in an infinite number of ways, but these five closings will intrigue your readers, no matter what.

They will evoke joy, melancholy, surprise and other powerful feelings in your audience, and your readers will remember how they felt about your story for a long, long time to come.

Download the free 2-page summary sheet for this post, and use it as inspiration whenever you are looking for your own perfect ending. Contains the five examples of this post summarized, plus two more endings in detail.

Definitely download this, so you don’t miss out on the last two examples!

And now the only thing left is…

Write an ending to one of the following prompts; write it out in the comments below. Two or three sentences are enough.

I’m curious to see how you guys are approaching these endings. Let me know: What’s your favorite type of ending; as a writer as well as a reader? Do you need a happy end?

Finishing your novel is something special, and you have several options for putting that final exclamation mark under your baby, before you release it into the wild.

Listen to your story: What does it need? A silent or a loud ending, an open or a closed finish? These ideas came from you, so you know the answer. Trust yourself. Your gut instinct will tell you.

Once you set that final period, celebrate! You pushed through it, you created something original and beautiful, something dramatic, fantastic or exciting, and nobody can ever take that away from you.

You made it, my writer friend… and now it’s time to be very proud of yourself!