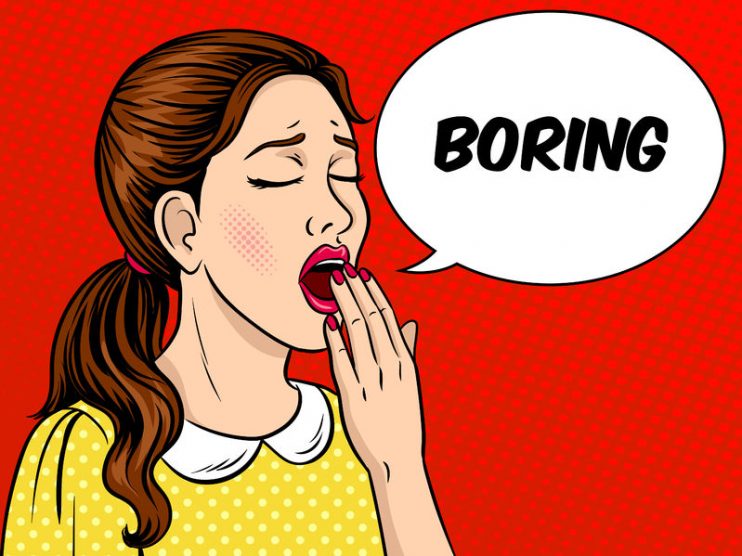 Oh yes, we all know this situation.

Our protagonist, Laura, attorney at law and queen of the hearts, just made her big closing argument in front of the grand jury, defending Ludowiko, the Lusting Lollipop Larcenist.

Tomorrow, the merciless jury will sentence Ludowiko to 800 years of girlscout duty, and he will run out of the court room for a wild chase.

But before that, you need a moment of peace and quiet, and you want to insert some missing info about Laura’s character, her preparations, and her everyday activities.

You show her shopping for groceries and buying an additional lock for her backdoor.

Yaaaawn, how boring is that…? You now have a sleeping pill of a scene at hand, a piece so dull it would make a dog with rabies put on his pyjamas.

What to do? How can you keep your reader hooked, and even convert the boredom into excitement? What happens in your story when nothing happens? What will you talk about with your readers while your main character is on the toilet? And if a story part is boring, can you just tell your readers that the cookie monster ate the exciting version?

No, you can’t. Sorry. In writing, there are no excuses.

I have a better idea. In this post, learn about:

And if you want to receive a handy cheat sheet of the four methods described in this post, be my guest…

Download a short summary of this post, and keep it on your desk for quick and easy reference while you are writing. This is your practical roadmap next time a boring scene rears its ugly head. 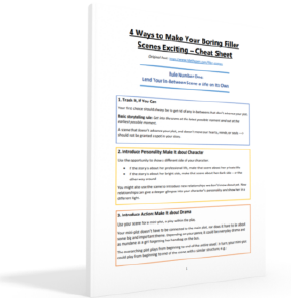 Let’s see how to keep your story fresh and exciting in every scene.

Your first choice should always be to get rid of any in-betweens that don’t advance your plot. To show your protagonist getting out of bed, showering and preparing her breakfast cereals would slow your story down ridiculously, destroy its rhythm and bore the boots off your readers.

You can observe this rule in meticulous action in screenplays and movies. Filmmakers in particular can’t afford to bore their audience for even one second. With the ultra-short attention span of today’s You Tube culture, viewers will just cold-bloodedly switch channels.

We want to read scenes that move us: Our souls, our hearts, and our minds. If a scene does neither of that, and doesn’t advance your plot, it should not be granted a spot in your story.

So if you only want dense, valuable scenes in there, why would you even consider leaving a filler scene in? Why not just cut it altogether, every single time? 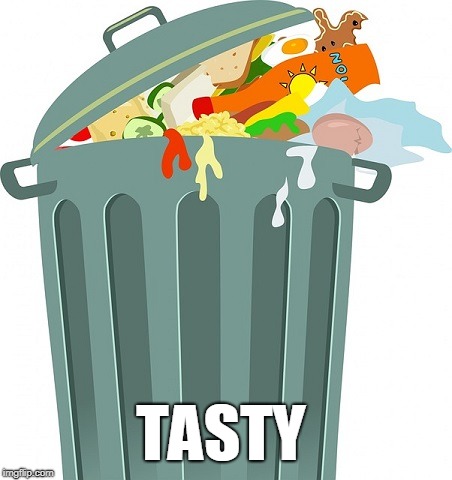 Sometimes you will have your very own reasons to keep a filler scene in the plot.

Maybe you need a connection piece between a scene and the next one. Sometimes, without it, the sequence of scenes just feels overhasty, or plump, or too intense too early. Maybe you just want to slow down the rhythm on purpose, in order to ramp it up more effectively later on.

Or you need a scene to weave in a bit of backstory, so we better understand where your character is coming from. You could have the goal to display your character’s personality and habits, maybe show her in a different light than the main plot does.

You also might see it as an opportunity to introduce another supporting character.

Or you want to give your character a moment to think about events, before he makes a decision.

Maybe you want to give your reader a feeling for passage of time or show social surroundings, working space or landscape.

Let’s just say you still want it in there. Should you decide to hang on to your scene, here are a couple of helpful techniques to keep your audience hooked.

2. Introduce Personality: Make It about Character

Your first option is to see this as an awesome opportunity to breathe more life into your characters!

Look at it this way: In most scenes, your plot carries the burden to advance your story.

But now, in your little in-between scene, your character has a chance to fully take the stage and showcase a brand new side of herself.

You might also use the scene to introduce new relationships we don’t know about yet. New relationships can give a deeper glimpse into your character’s personality and show her in a different light.

Each of us humans beings is a complete drama on his own. We are also utterly entertaining in our own ways… Use your pages so your reader gets to know your characters better and your entire work will profit!

3. Introduce Action: Make It about Drama

Better yet, when you get several of us together, the drama is exponentiated. You could involve several characters in your scene and use it for a mini-plot, a play within the play.

Your scene’s plot doesn’t have to be connected to the main plot, nor does it have to be about some big and important theme. Depending on your genre, it could be everyday drama and as mundane as a girl forgetting her handbag on the bus.

If you want the complete ballad of the forgotten handbag, how about this:

Of course, you can also let a character play through the whole sequence solely in his mind.

For example, let him worry about horrible outcomes of the main plot. At that point, he won’t even have to interact with anybody to create drama; he doesn’t even have to move or to do anything. Just let a worst-case scenario play out in his head.

If you are bored, just make things more difficult for your characters: A nightly walk through the park is a lot more suspenseful if you are not sure if somebody is following you. If nothing else helps, you can always fall back on conflict to spice up your tale.

Make sure your mini-plot fits the kind of story you are telling and doesn’t overwhelm your main plot. A comedy with the mini-plot of a mad axe murderer can be done, but you have to make sure to hit the right note… 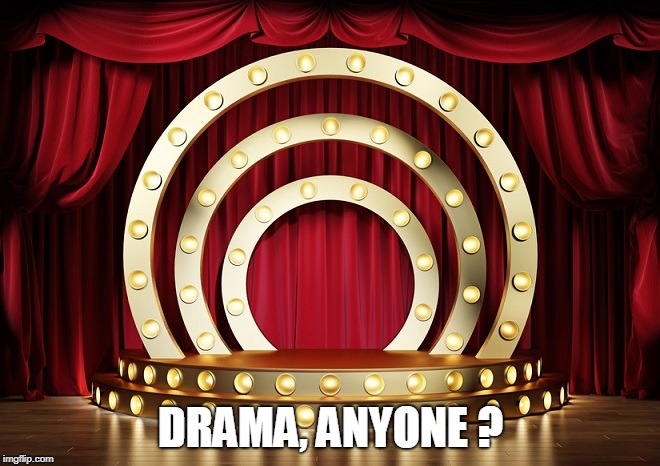 4. Introduce Questions: Make It about Suspense

Suspense is always about questions: Who is the murderer? Will Godzilla eat the city? What secret does Martin hide from Sharon?

Your readers will never get bored as long as there are nagging questions on their minds.

In your in-between scene, you have two choices to raise a question.

Option one: You could spin a question of the overall plot further. For example, letting your character contemplate if Craig can even be the murderer, because he was on vacation the entire time; letting your readers know that Godzilla has just eaten another city block; hinting at that breathtaking secret Martin has.

Option two: Raise a question that is only relevant for your filler scene. In the example above, it would be the question: Will the girl ever get her handbag back?

In the end, dealing with in-between sections is about giving your scenes a life of their own.

This, of course, is something you should always do in any scene, so it’s excellent practice.

Want to save all of that information for the day your next filler scene comes around? No problem, I got you covered! You can download a handy 2-page summary PDF of this post here.

But what would a Ride the Pen post be without a handy prompt?

Here is your task of the day: Find a way to make the following filler scene interesting.

Puck and Zack have just robbed a bank. After a wild chase through the city, they finally managed to shake off the police. As the day comes to an end, they are hiding in an old warehouse. They plan to spend the night there, before leaving the city with their loot on the next day.

Describe what you would make this scene about. Remember, the scene doesn’t matter for the overall plot. Just let us know your concept in broad strokes; no need to write it out (unless you want to).

Post your prompt in the comments below. I want to hear your ideas!

You are a storyteller, and if you want to be a really good one, know that not only the raisin parts of your story are worth telling. Any part of your story should be worth writing well and making it at least a little bit interesting.

And if you do take the effort to polish every part of your story, it will feel intriguing and complete and shine on like a crazy diamond.

Your story will engage your readers without ever letting them off the hook, it will draw them in deeply and take them on a rollercoaster ride they won’t forget…