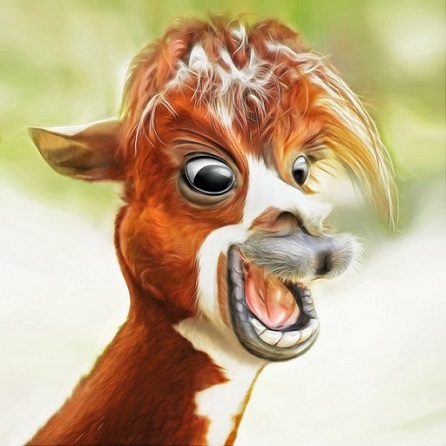 “Don’t tell me the entire apartment is under water.” Curly scratched his head. “I scuba dived only in the living room.”

You read the dialogue lines above, and you immediately know about the situation: Curly is confused.

And the reason you know exactly what’s up is, you guessed it, the fitting description of body language. Body language is added in just four tiny words. But those four words add a lot of depth to the scene!

Let’s say you wanted to give your entire scene a completely different meaning. All you would have to do is change that body language snippet. Just read the dialogue again, but this time replace the body language part with one of the following parts:

Curly shook his fist. (He is pissed at somebody and maybe threatening them.)

Curly sniffed back his snot. (He is devastated.)

Curly grinned and rolled his eyes. (He is a looney bin and a little destruction doesn’t faze him.)

Yes, that little description of physical movement is so powerful it gives your scene a completely different context. You describe a lot with very few words. But at the same time, you achieve much more:

All of this is the power of using body language.

And like always, oh esteemed reader, a tasty, tasty free download is on the menu. This time, it’s a 2-sheet-summary of this post; it will give you a quick overview of its most important points.

Print it out, and put it next to you on your desk, so you have it in front of you while you write. Or just store away safely in a drawer and forget about it:

Now raise your eyebrows and drop your jaw in delight, because here is my complete Body Language 101, summarized by five quick tips that will help you with “puppeteering” your characters:

1. Use Body Language Only From Time to Time

If you use body language too much, it will become annoying and obvious and lose its subtle qualities. Instead, only describe characters’ facial expressions and postures from time to time. Make them smoothly blend in with the dialogue and the other scenic description!

Sneak your body expressions into the mix unobtrusively. Don’t forget that you have several other options to “tag” and break up your dialogue lines:

Try to vary these options, so none of them gains the upper hand and becomes annoying. That way you will get a well-balanced and structured scene that pays equal attention to dialogue, characters and descriptions.

When you insert body language, always do it in passing and don’t give any extra weight to what you describe.

If you want to look really stupid, you could write like this:

“So surely you can tell me where you were on the evening of the twenty-second of October?” George asked with eyes narrowed to slits because he felt very suspicious about Blake’s story.

This example does both, showing and telling. That’s one too many, and the too many one is the telling part! Cut out “because he felt very suspicious about Blake’s story.”

When you write like this, you also take your reader for stupid. Let her connect the dots herself – if she has followed the story, she will know why George’s eyes are pressed to slits.

Write it like this instead: “So surely you can tell me where you were on the evening of the twenty-second of October?” George asked with eyes narrowed to slits.

That’s much better, now we don’t even have to go inside George’s head artificially (“George felt suspicious”); we can just describe objectively what the reader sees. By laying out our dialogue and scene well, we can be certain she will know what’s up.

Conclusion: Whenever possible, don’t name the feeling, but just show the body language. And definitely never put both of them (body language and description of feeling) together in the same sentence.

3. Have a Very Clear Idea of What Your Character Is Feeling

Take a look at this ambitious description of body language:

“Randy held one hand in his other behind his back, then suddenly stroked his throat while he was leaning towards Linda.”

What’s happening here? Nobody knows, Randy’s behavior is too much. As far as we are aware, it doesn’t make any sense. It seems like the writer pays attention to the undertones so much, that in the end he is not really depicting anything but undertones…

Don’t write so cryptically that nobody can understand where your character is coming from. A single description of body language at a time is absolutely enough. You, the author, always have to be clear about what your characters are feeling. And the characters’ body language has to match their feelings.

But where can you take an accurate description for flattery or envy from?

Your best bet is to take it from yourself. Imagine you feel flattered by an enormous compliment, like the best compliment ever. What expressions would your face, your arms, your body be making? Totally immerse yourself in the feeling like a good actor, and see how your body responds.

Remember the last time you felt really envious about somebody?

Use that memory to immerse yourself in the feeling for a second and ask yourself how your body would react. I bet you are super imaginative, so you can do it!

Reading a book about body language is also an excellent idea. The Definitive Book of Body Language by Allan and Barbara Pease is a very systematic and comprehensive guide to everything you ever wanted to know about body language. I recommend it whole-heartedly.

5. Several Types of Body Language You Can Use

Our bodies have several ways of giving our secrets away. Here are some examples and a bit of inspiration on what’s possible:

These are just some pointers. Try to come up with authentic, unique expressions you have noticed with yourself or with people around you.

And there you have it, 5 quick tips. Which means it’s…

Pick one of the following dialogue lines, and replace that ugly, telling adverb (or adjective) with body language:

“I will never again come to one of your parties,” Paul said angrily.

“What does this headline say about the Labour Party?” Annabelle asked curiously.

“You better not break your fingers when your drive in that nail,” Jill said in an amused tone of voice.

“Come on! Go, go, go, go, Aaaaaalbert!!” They cheered him on excitedly.

“That rain is a drag,” Ernesto said sadly.

“Thank you very much,” she said, visibly flattered.

Equipped with all of this knowledge, you now have an extremely elegant and effective way to describe what’s really happening under the surface of your dialogue. You can now go and fill your characters with overflowing emotions and life.

Once you manage to describe the body language of your figures accurately, they will automatically take on a life of their own: Your reader will feel like they were standing next to him in his living room.

Get Your Handy Free PDF Summary of This Post: